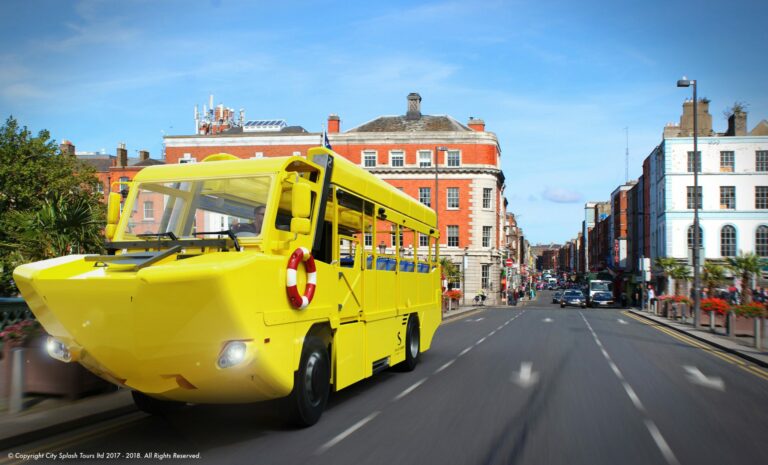 The business idea began, when Peter and Lynda Stocks – an Irish-American couple – came across Boston Duck Tours and realised the potential for a similar tour in Dublin.   With such a rich, water-based history, there could be no better way of telling this story than with vehicles capable of travelling on both land and water. The first DUKW in the Viking Splash Tours fleet came across to Ireland by ferry and is today known as ‘Balder’ – the Viking god associated with light, beauty, love and happiness.

Selling from an old fire engine on Bull Alley Street, the company had humble beginnings. The concept was unique, colourful and a little crazy so needless to say it was a roaring success right from the start! Viking Splash Tours took tourists and locals from the beaten track of Dublin City Centre and out into the docklands which was just beginning to receive its very own make-over. Now, 20 years later, Viking Splash Tours and the Docklands have been rejuvenated and both have new leases of life.

As business grows, the fleet has increased in size year by year, and with the support of Capitalflow, the company have just acquired their latest vehicle, the MAN powered Salamander Amphibious vehicle, which joins the Viking Splash Tour Fleet.

Sales Director David Clarke said “we are delighted to be supporting such a dynamic and exciting company. The Viking Splash Tour is going from strength to strength and Capitalflow is delighted to be a part of it! The latest vehicle acquisition is a great example of how our team can help finance for a wide range of vehicles and equipment even those that are different from the norm!”

For further information or to book a tour click here

Recent Posts
Case Studies
Login to Capitalflow
Reset Password
Enter the username or e-mail you used in your profile. A password reset link will be sent to you by email.